Advocacy Chair for the Zonta Club of St. Louis, District 7, promoted the posting of a billboard with the Zonta Says NO to Violence Against Women messaging.

Judy Jensen promoted the posting of the billboard to support the 16 Days of Activism against Gender-Based Violence campaign.

Past President Sherri Brooks designed the display, which included the international ZI logo, and Barbara Meyer negotiated a discounted rate with the local vendor, DDI Media.

Club members asked passerby to contact their legislators and listed zonta.org for references.

The ad appeared for 10 seconds at a time every minute in rotation with other ads and ran for two weeks.

The Zonta Club of Kankakee supported the 16 Days of Activism against Gender-Based Violence and Zonta Says NO to Violence Against Women campaign with the assistance of local law enforcement and others within the criminal justice system.

The Zonta Club of Offenburg, District 30, took part in this year’s international campaign to say no to violence against women. From 16 to 26 November, the historic town hall in Offenburg, a city located at the brim of the Black Forest and close to the French city of Strasbourg, was illuminated in bright orange and attracted a lot of visitors and passers-by.

As in Offenburg, the Christmas lighting and the Christmas Market started 26 November and the Zonta club had to organize the campaign before that date. At the same time, a cooperation with the bakers’ association was initiated and 40,000 bread bags were printed that were distributed to all the local bakery shops. They had the slogan “Zonta Says NO” printed on one side and “Gewalt kommt mir nicht in die Tüte” on the other side. “Das kommt nicht in die Tüte” is a German saying meaning “this is an absolute no-go”, so the inscription reads “Violence is an absolute no-go”.

On 25 November, the international day against violence against women, various local celebrities distributed bags filled with pretzels for free. Among these were the Mayor of Offenburg and Christina Obergföll, gold-medalist in javelin throwing.

The press coverage was excellent. All in all, the fourteen club members of the Zonta Club of Offenburg were very content with the outcome of the campaign and would like to repeat the campaign in 2020.

Members of the Zonta Club of Neustadt an der Weinstrasse, District 28, are proud that they managed to illuminate numerous public and private buildings for one week in orange light in honor of the Zonta Says NO campaign and Zonta’s centennial anniversary.

The Hambach Castle, the Hornbach Tower, the Cineplex, the Wolfsburg, the town hall and other city buildings, the Stiftskirche and the Gimmeldinger church, along with many other buildings, were illuminated.

The Zonta Says NO Campaign for the Zonta clubs of Bombay I and Bombay III, District 25, commenced on 4 December with members of both the clubs saying no to violence against women and child marriage.

The students of Lady Engineer School, both girls and boys in ninth and tenth grade classes participated in the program.  Club members showed a video of Kirti Bharti of Saarthi Trust, who is a warrior against child marriage and interviews of girls rescued from child marriage and now leading a better life. These depicted the ill effects of child marriage and created social awareness.

Next, slides were projected with various captions saying no to violence and child marriage and advocating for the protection and safety of women.

The students were asked to share their views and it was nice to see the boys equally and enthusiastically participating along with the girls.

Two dances were performed by the students. One depicted violence against women, particularly rape and how to fight it and the second focused on women’s empowerment.

A pledge was taken by the students, teachers and Zonta members to stop violence and child marriage whenever and wherever witnessed or heard. The session ended with the dance participants receiving certificates of appreciation.

The workshop was conducted by the Counselor Ms. Reshma and her team and it focused on sexual harassment at home and outside the home, as well as legal and social recourse to combat the issue. A few Bolllywood songs were shown to the girls and questions were asked and they were made to understand the reality of violence against women and girls. The presidents of the clubs shared the importance of changing their point of views or understanding of the situation in the community.

The participants of the event were girls under 18 from four community centers and shelter homes in Mumbai. It was a very interesting and interactive session with active participation from all, including the Zonta members.

On 10 December there was session focused on sex and gender and for the finale, both clubs sponsored gifts which were distributed to about 130 girls from their shelter homes and community centers.

On 4 December, members from Zonta International District 15 gathered at the Michigan State Capitol in Lansing for its first-ever advocacy day.

Zonta members met with representatives and staffers who did not know that minors can get married in Michigan. Rep. Kara Hope, a cosponsor of one of the bills to end child marriage, and Rep. Daire Rendon, who sits on the judiciary committee, came to the district’s legislative briefing. 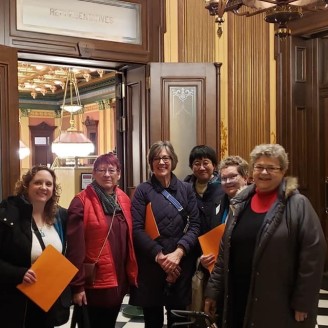 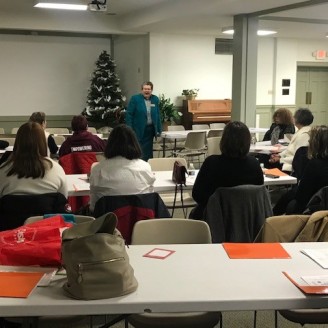 During the 16 Days of Activism Against Gender-Based Violence, the Zonta Club of Pontiac-North Oakland, USA, District 15, had a display at the Oakland County Courthouse.

The display included silhouettes of women, which represented the 17 Oakland County residents who died from domestic violence last year.

There were also 42 paper dolls, each representing 100 assaults, for a total of more than 4,200 reported assaults last year.

“This is nothing to be proud of. Domestic Violence is not about love; it is all about power,” Gail Johnson, Zonta Club of Pontiac-North Oakland president, told The Oakland Press.

The Zonta Club of Melbourne, USA, District 11, participated in a variety of activities during the 16 Days of Activism Against Gender-Based Violence.

Inspired by other  Zonta clubs around the world that lit up buildings and monuments in orange, club members asked business owners to light up their storefronts in orange to show their support for the Zonta Says NO to Violence Against Women campaign. They passed out fliers and were featured in the local newspaper. The club had a great response to this initiative.

The club also took out billboards along the I-95 Corridor from 25 November through 10 December. Interstate 95 is the main Interstate Highway on the East Coast of the U.S., running from Route 1 in Miami, Florida, to the Houlton–Woodstock Border Crossing with New Brunswick, Canada, and is used by millions of people daily.

On 24 November, the club participated in the Space Coast Basket Brigade, which provided 3,346 local families with everything they need to prepare a traditional Thanksgiving meal. Club members volunteered in their orange Zonta Says NO t-shirts, using the opportunity to spread awareness of the importance of ending violence against women. 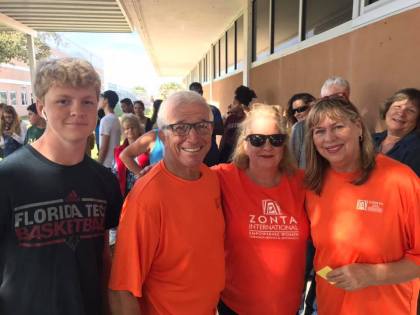 The club also involved high school students in its efforts. Members of the Melbourne High School Z Club arranged for their school’s electronic billboard to encourage students to wear orange and coordinated a presentation with Sheriff Wayne Ivey and a human trafficking survivor to speak to the students on 10 December. 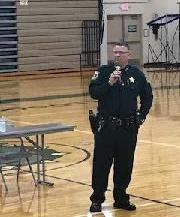 As part of Zonta International’s 100 years of empowering women, the Zonta Club of Trenton/Mercer, USA, District 3, purchased an ad to be displayed on a shuttle bus that services Trenton, New Jersey, and surrounding towns.