Advocacy Chair for the Zonta Club of St. Louis, District 7, promoted the posting of a billboard with the Zonta Says NO to Violence Against Women messaging.

Judy Jensen promoted the posting of the billboard to support the 16 Days of Activism against Gender-Based Violence campaign.

Past President Sherri Brooks designed the display, which included the international ZI logo, and Barbara Meyer negotiated a discounted rate with the local vendor, DDI Media.

Club members asked passerby to contact their legislators and listed zonta.org for references.

The ad appeared for 10 seconds at a time every minute in rotation with other ads and ran for two weeks.

The Zonta Club of Kankakee supported the 16 Days of Activism against Gender-Based Violence and Zonta Says NO to Violence Against Women campaign with the assistance of local law enforcement and others within the criminal justice system.

The Zonta Club of Offenburg, District 30, took part in this year’s international campaign to say no to violence against women. From 16 to 26 November, the historic town hall in Offenburg, a city located at the brim of the Black Forest and close to the French city of Strasbourg, was illuminated in bright orange and attracted a lot of visitors and passers-by.

As in Offenburg, the Christmas lighting and the Christmas Market started 26 November and the Zonta club had to organize the campaign before that date. At the same time, a cooperation with the bakers’ association was initiated and 40,000 bread bags were printed that were distributed to all the local bakery shops. They had the slogan “Zonta Says NO” printed on one side and “Gewalt kommt mir nicht in die Tüte” on the other side. “Das kommt nicht in die Tüte” is a German saying meaning “this is an absolute no-go”, so the inscription reads “Violence is an absolute no-go”.

On 25 November, the international day against violence against women, various local celebrities distributed bags filled with pretzels for free. Among these were the Mayor of Offenburg and Christina Obergföll, gold-medalist in javelin throwing.

The press coverage was excellent. All in all, the fourteen club members of the Zonta Club of Offenburg were very content with the outcome of the campaign and would like to repeat the campaign in 2020.

Members of the Zonta Club of Neustadt an der Weinstrasse, District 28, are proud that they managed to illuminate numerous public and private buildings for one week in orange light in honor of the Zonta Says NO campaign and Zonta’s centennial anniversary.

The Hambach Castle, the Hornbach Tower, the Cineplex, the Wolfsburg, the town hall and other city buildings, the Stiftskirche and the Gimmeldinger church, along with many other buildings, were illuminated. 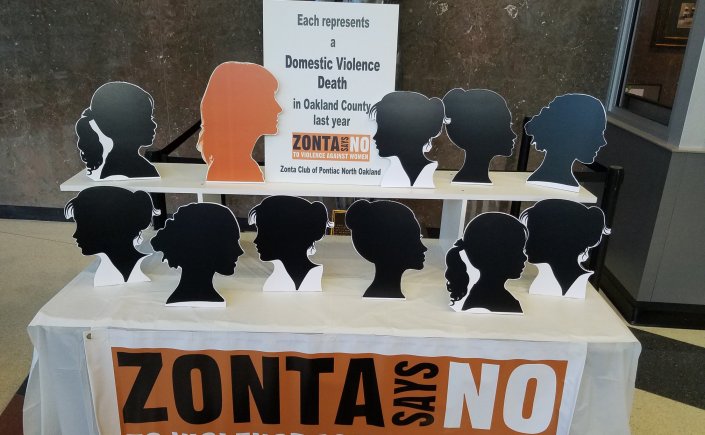 During the 16 Days of Activism Against Gender-Based Violence, the Zonta Club of Pontiac-North Oakland, USA, District 15, had a display at the Oakland County Courthouse.

The display included silhouettes of women, which represented the 17 Oakland County residents who died from domestic violence last year.

There were also 42 paper dolls, each representing 100 assaults, for a total of more than 4,200 reported assaults last year.

“This is nothing to be proud of. Domestic Violence is not about love; it is all about power,” Gail Johnson, Zonta Club of Pontiac-North Oakland president, told The Oakland Press.

The Zonta Club of Canberra Breakfast Inc in Australia, District 24, held a somber service this week to memorialize the 52 women and eight men who died from intimate partner violence.

A garland of orange flowers shaped the word NO, the color a reminder of the fifth UN sustainable development goal of equality. December 10 also marks the conclusion of 16 Days of Activism against Gender-Based Violence, under the theme, “Orange the World: Generation Equality Stands against Rape!”

Continue reading about the impactful event. 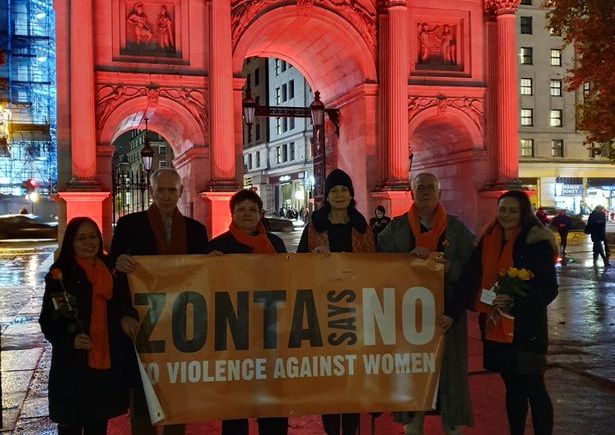 During the 16 Days of Activism against Gender-Based Violence, the Zonta Club of London lit a famous landmark in orange, drawing attention from many passerby.

The club lit the Marble Arch in central London in orange light on 25 November and club members stood nearby to share information on Zonta International and Zonta’s campaign to say NO to violence against women.

Read more about how people reacted to the public display. 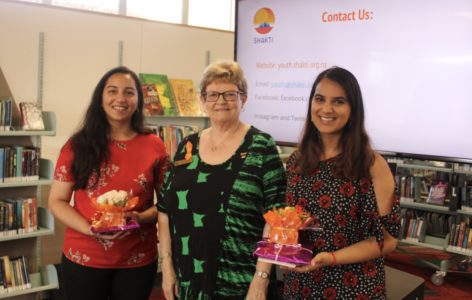 The Zonta Club of East Auckland Area, District 16, partnered with a local organization to raise awareness of ending child marriage.

The club, along with Shakti, a women’s refuge organization, installed a display at a local library.

Read more about the information the club shared.

During the event, attendees heard four reports from women who were victims of violence.

This was followed by a short period of meditation and words of condolence spoken by a cleric. The singing of the gospel choir increased the feeling of empathy and compassion. At the end of the ceremony members lit candles in memory of all women who have suffered violence in the city and in the world. The church, along with other prominent buildings, was illuminated inside and outside with an orange light which made the whole even more of a spiritual experience.

As part of the Zonta Says NO to Violence Against Women campaign, the Zonta Club of Prowers County, District 12, worked with the city of Lamar, Colorado to issue a proclamation. The proclamation declared the days between 25 November and 10 December as the 16 Days of Activism against Gender-Based Violence.

Club members are also raising awareness of the issue of violence against women around their community by distributing posters and banners to local businesses.