Club members created media pages that turned negative connotations of women to their rightful, valued and positive significance. Each page was designed to strengthen gender equality, lessen prejudice and stop violence against women and girls. Each post was shared on the club’s official Instagram account (@zecphils1) as well as individual members’ accounts on Instagram and Facebook using the hashtags #ZontaSaysNO and #16days.

This campaign brings forth the discussion surrounding sexual harassment in the workplace and the need to fundamentally transform the power structure and discriminatory norms that enable gender-based violence and discrimination to exist. By turning negative connotations of women into its positive valuation and rightful importance, club members advocated for a change in attitude in general and more specifically attitudes toward women in the work place. Club members hope this campaign brings awareness as well as accountability to the issue at hand and that the message transcends beyond the work environment. 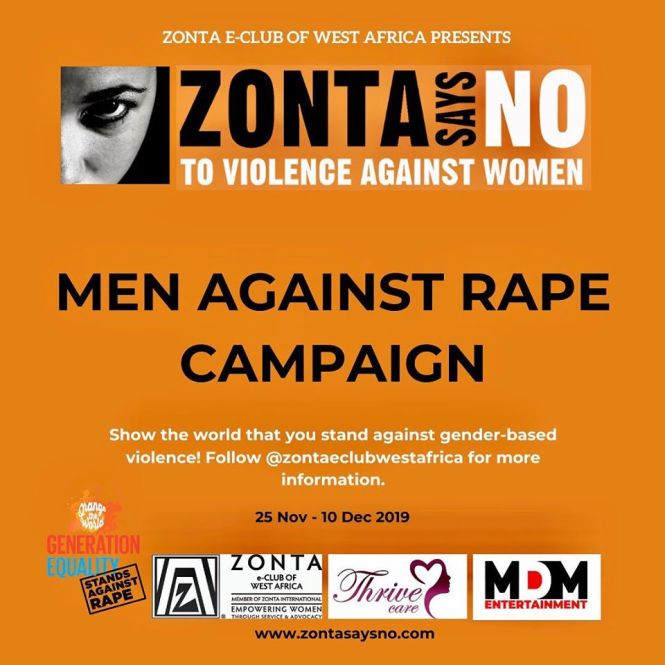 The Zonta e-Club of West Africa, District 18, unveiled a new advocacy project during the 16 Days of Activism against Gender-Based Violence.

The project, “Orange the World: Men Against Rape” calls on men to take a stand against attitudes that normalize rape culture, child marriage and all forms of violence against women and girls.

Throughout the 16 Days, the club is posting graphics featuring photos and quotes from men supporting their initiative on their Instagram and Facebook accounts.

The Zonta e-Club of West Africa is asking men to fill out a form to show their support.

The form, in part, reads: “There is overwhelming evidence that the majority of sexual assaults are perpetrated by men against women. However, not all men are perpetrators! In fact, some men are victims and the majority of men have never raped or sexually assaulted anyone. For decades, men have been left out of actions geared toward the elimination of rape and other forms of violence against women but, at Zonta e-Club of West Africa, we are looking to change this by giving men an opportunity to speak up as advocates for women’s rights. To this end, we invite you to add your voice to our 16 Days of Activism Campaign. Show the world that you stand against gender-based violence!”

The club is partnering with Thrive Care and MDM Entertainment for the project.

The Zonta Club of Lebanon in Indiana, District 6, is participating in the 16 Days of Activism against Gender-Based Violence in two ways this year. The first is by displaying orange pinwheels, the domestic violence hotline phone number, and the “Zonta Says NO” slogan and Zonta Club of Lebanon logo on the Boone County Courthouse lawn during the 16 days, bringing attention to both the club and to the Zonta Says NO campaign.

Club members also participated in a photo shoot during the September meeting, each member holding a placard with a statistic relating to gender violence, violence against women, FGM, and/or child marriage.  These photos are being released and shared to Zonta Club of Lebanon’s Facebook page each day over the 16 days.

As part of the 16 Days of Activism against Gender-Based Violence, the Zonta Club of Pocatello, District 8, collected and distributed feminine hygiene and personal care items to distribute to 16 local places for underserved women and girls to have free access to the products.

Members delivered products to one stop a day for 16 days. Each location received at least one box of supplies and some even received two boxes.

Club members collaborated with three businesses to have drop-off locations so non-members could donate and participate as well.

Club members selected 16 places around their community that they felt offered the most access for women and girls in to gain free access to the items. The stops included seven junior and senior high schools, three battered women or homeless shelters, a pantry on the campus of Idaho State University and several other locations that offer services or assistance to a wide variety of community members.

Members who dropped off the donations took selfies and posted them on social media at each stop to help spread the message to end violence against women. They also used the hashtags #womendoing and #tamponladies to help attract attention to their cause.

For many girls, child marriage can seem like the only option. Watch what happens when we give girls choices.

By the end of this year, the Ending Child Marriage Project has the potential to reach 2.5 million girls in 12 countries.

As we begin 2019, reinvigorate your dedication to ending child marriage by joining Zonta International in saying NO to the violating practice. 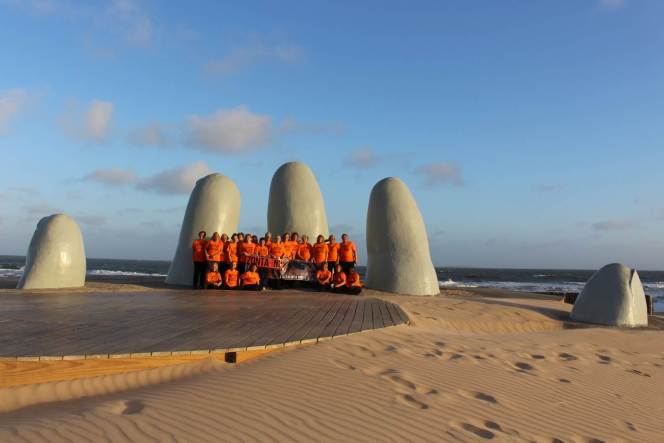 Members of the Zonta Club of Punta del Este-Maldonado ended their advocacy during the 16 Days of Activism campaign by posing for a photo in front of a popular monument in their city, called La Mano de Punta del Este.

From 25 November to 10 December, during the 16 Days of Activism against Gender-Based Violence, Zonta club members embraced the Zonta Says NO to Violence Against Women campaign and advocated to end violence against women and child marriage in their communities.

Watch the video below to see a few examples of how club members said NO during the campaign.

When it comes to child marriage, there is not free and full consent from the intending spouses. This makes child marriage a violation of human rights and it must end.

If current trends continue, the number of girls and women married as children will reach nearly 1 billion by 2030. We must take action to stop this number from rising.

Child marriage exists in every society, culture and country. When the potential of one third of the population of the developing world is cut short, we all lose out on a better world.