The Zonta Club of Fredericksburg, TX, USA, had big plans again to promote the awareness of the Zonta Says NO to Violence Against Women campaign.

This year, the club wanted to raise awareness of the campaign in the schools of Fredericksburg and by contacting our local and state government representatives. Zontian Lisamarie Williams met with Dr. Joe Rodriguez, the Fredericksburg Independent School District (FISD) superintendent, to discuss the campaign awareness.

The club aimed to raise awareness in the elementary and middle schools, with the staff’s aid, and in the high schools with the student body. As a young boy, Joe was personally affected by domestic violence, so the campaign was a subject near and dear to his heart.

The theme A Walk in Her Footsteps was proposed for the high school campaign, and orange paper footprints lined up the main hallway for a visual impact for the students to see during the 16 Days of Activism.

The club also placed a table in the foyer with a banner that says Zonta Says NO to Violence Against Women and an eye-catching orange table cloth. Various student clubs were enlisted to manage the table during break time and before and after school to hand out pre-cut footprints for students and staff to write words of encouragement on and post them on the walls.

Many students participated in the event, and the wall was full of orange footprints.

The club also handed out orange ribbon stickers for everyone who posted a footprint. Informational cards were available as well.

The campaign was a grand success, and the club is proud of the efforts that the students, student clubs and its members put forth to make the event happen.

The Zonta Club of Dhaka II, Bangladesh, teamed up with its Golden Z Club of Young Leaders to arrange a movie screening of Rehana Maryam Noor at a cineplex in Dhaka as a part of its fundraising. The event also aimed to create awareness of gender-based violence on 10 December.

The movie is about an assistant professor and single mother who one day happens to witness the sexual assault of one of her students by her superior. The film was nominated at the prestigious Cannes Film Festival and received numerous accolades.

The mayor of Dhaka City North inaugurated the event.

As a part of its 16 Days of Activism during the Zonta Says No to Violence Against Women campaign, the Zonta Club of Dhaka II, Bangladesh, collaborated with its Golden Z Club members to hold a walk and a brief yoga session at the Justice Shahabuddin park in Gulshan. The event took place on 4 December with the support of the Dhaka City Corporation.

Due to the last lockdown in Austria, the Zonta Club of Vienna Parking extended the Zonta Says NO campaign. On 20 and 21 December, a pop-up charity store turned numerous donated bags into money under the motto “Bags Help Women.”

The club raised a respectable 4-digit sum for the violence prevention project StoP – Neighborhoods without Partner Violence in Vienna. StoP is a neighborhood project to prevent partner violence and domestic violence. It has a proven track record of success in Germany over many years, and the Autonomous Women’s Shelters Association in Vienna has coordinated the project since January 2019.

The club chose to support the StoP project, as women and children, in particular, are disproportionately affected by domestic violence. They collected bags of all kinds for the pop-up store over several weeks. The charity store accepts any handbag as long as it is intact and well-maintained. Well-known brand-name bags were especially welcome as they’re always in demand and can be sold for a lot.

The club would like to thank Boutique Hotel Altstadt Vienna and its team for their generous support for the event. 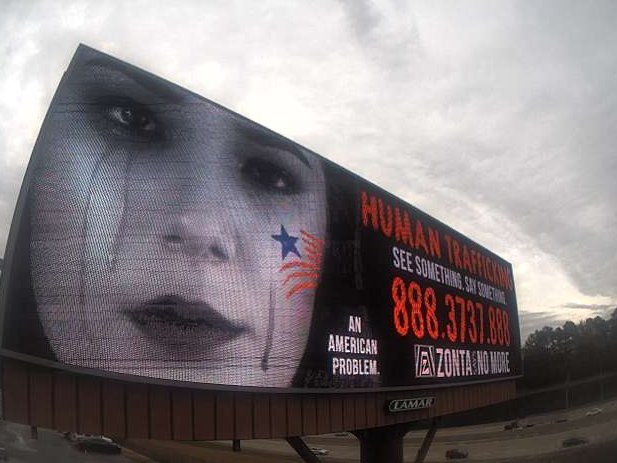 Photo courtesy of the Zonta Club of Birmingham

The Zonta Club of Birmingham recently put up this billboard on I-65 South at Exit 250 to draw attention to the problem of human trafficking, especially in the run up to The World Games 2022 in Birmingham in July.
Birmingham has a reputation as a major center for human trafficking, according to law enforcement and other officials.

This is true in part because the city is at the center of several major transportation routes — I-20, I-59 and I-65.

I-20 has often been dubbed a sort of “superhighway” for human trafficking.

Now a women’s group in the area with a long history of concern over trafficking and women’s issues has put up a billboard on I-65 to draw attention to the problem.

The Zonta Club of Birmingham put up the billboard on I-65 South at exit 250 on Dec. 4, and it will remain up until Jan. 2, club member Jean Bouler told Iron City Ink.

The billboard contains the message, “See something. Say something,” meaning that citizens should report what they consider suspicious activity, and has a phone number, 888-373-7888.

“The billboard is in response to the The World Games 2022 in Birmingham,” Bouler said.

The World Games will take place in the Birmingham area July 7-17 this year and is expected to draw about 100,000 visitors to the city from all over the world.

Club members are concerned that The World Games could cause a uptick in demand for sexual trafficking.
Other officials have expressed a similar concern, including Birmingham Mayor Randall Woodfin.

“An increase in tourists seeking entertainments, including commercial sex, increases the potential risks for exploitation and human trafficking,” Woodfin said in December 2019, according to a report at Birmingham Watch.

The Zonta Club of Birmingham will also host a virtual program about the issue, “Human Trafficking: An American Problem,” on Jan. 11, 11 a.m.-1 p.m.

The program will be led by Amy Wagar, a human trafficking survivor advocate and trainer in Birmingham.
To register, go to Eventbrite.

The Zonta Club of Birmingham was started in 1940 by professional women who were not allowed to join the then male-only Kiwanis and Rotary clubs. The goal is to empower women through service and advocacy.

Zonta of Birmingham has long been aware of human trafficking because it is a major issue with Zonta International, Bouler said.

The international organization has chapters in 63 countries and works with the United Nations to provide financial support and technical assistance to women and children in developing countries.

The local club has about 35 members and taken on the issue of human trafficking in the past, sponsoring programs, speakers and posters in restaurant restrooms, Bouler said.

For several years, the club has funded billboards in Birmingham with the message, “Say No to Violence Against Women.”  “We also support the YWCA women’s shelter and are hopeful that the billboard message helps,” Bouler said.

Every November, the Zonta Club of Key West, USA, goes orange to support the Zonta Says NO campaign to end gender-based violence. The club decked out palm trees with orange ribbons along North Roosevelt Blvd, Key West, to commemorate the International Day for the Elimination of Violence Against Women on 25 November.

The ribbons included information cards about the Zonta Says NO to Violence Against Women initiative to get more people not to look away but to speak up and take action, and get involved in their community. The club hung the orange ribbons during the 16 Days of Activism Against Gender-Based Violence from 25 November to 10 December, International Human Rights Day.

Residents and visitors of Key West were encouraged to support the campaign by wearing orange during the 16 Days.

The club strived to raise awareness and promote open discussions to help end violence against women and eliminate the detrimental consequences this violence has on the well-being of their community, including women, partners, children – One Family.

The Key West Commission presented the annual proclamation to the club in recognition of 16 Days of Activism, permitting the display of the orange ribbons.

To kick off the 2021 Orange The World campaign, the Zonta Club of Bad Bergzabern, Germany, lit up the Bad Bergzabern castle in orange on 25 November.

Club members positioned themselves in front of the castle, dressed in orange and holding orange umbrellas. Club president Susanne Faber opened the event with a minute silence in memory of the 139 women who had been killed by their current or former partners in Germany this year, followed by a short speech in which she addressed the many existing forms of violence against women.

Several local officials joined Susanne in speaking up against violence against women. They later talked with the interested visitors, who were also dressed up in orange, showing their solidarity gathered around. Many other prominent buildings in the area lit up in orange that same evening to show their support for the campaign: The German Wine Gate (Schweigen-Rechtenbach), Dionysius Chapel (Gleisweiler) and the Museum of Annweiler, for example, as well as Landeck Castle, Town Hall and St. Nicholas Chapel (Klingenmünster).

“Our dream for the future is to have the complete Southern part of the German Wine Street illuminated in orange someday,” Susanne said when closing her speech. 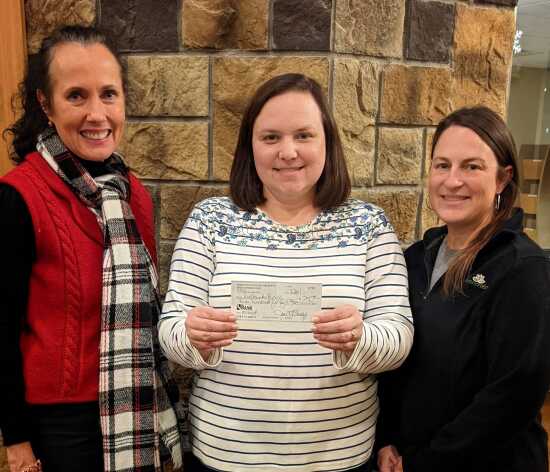 Zonta Club of Cape Girardeau recently donated $1,000 to Safe House of Southeast Missouri to support a project designed to help local healthcare providers safely refer victims of domestic violence to the Safe House for services. The project will focus on providers in Cape Girardeau, Bollinger and Scott Counties.

Zonta Club of Cape Girardeau is part of Zonta International, a leading global organization of professionals empowering women worldwide through service and advocacy.

The Zonta Club of Denver, USA, partnered with The Blue Bench (TBB) and the Novel Strand Brewing Company on 3 December to promote Zonta Says NO and educate patrons about violence against women.

Since the beginning of 2021, the club’s advocacy, service and public relations committees partnered with TTB to create a poster to raise awareness of sexual harassment and assault. TTB is one of the club’s service award winners. TBB’s Safe Bars Project trains staff in establishments that serve liquor how to recognize and respond to sexual harassment and assault incidents.

The posters are displayed in 10 Safe Bar trained businesses and they offer information about consent and safety along with phone numbers and a Quick Response (QR) Code for access to sexual assault and domestic violence resources available.

Additional establishments are scheduled to receive posters and training in 2022.

The club welcomes and collects testimonies from female survivors, which is a priority. However, they ask how we can anticipate violence and prevent acting out and recidivism?

"Through the Zonta Says NO to Violence Against Women campaign, Zonta clubs around the world are uniting to raise their voices to bring awareness to this issue and advocate on behalf of gender-based violence survivors."