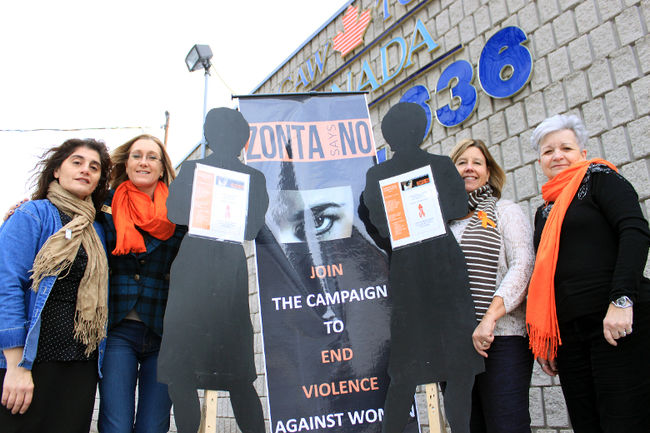 The Zonta Club of Woodstock, Ontario, Canada, kicked off the 16 Days of Activism by lighting up trees orange and purple in front of the Police Service headquarters on Wednesday, 25 November.

Purple and orange lights will light up trees in front of the Woodstock Police Service headquarters on Dundas Street this Wednesday, November 25.

The Zonta Says No launch, held at the police station between 5:30 and 6 p.m., is designed to be “subtle but effective” way of making the community aware of violence against women.

“I would say this is a significant way to raise awareness about violence against women and women’s issues in our community,” said Sheena Poole, president of the Zonta Club of Woodstock.

The Zonta Says No campaign, in partnership with the Domestic Assault Review Team, is designed to highlight a number of national and internationally recognized days of remembrance during the 16 Days of Activism Against Gender Violence.

The orange lights are representative of the United Nations UNITE Orange Day Campaign and the purple lights are part of the Shine the Light on Woman Abuse, a public awareness campaign on the London Women’s Centre.

Over the next 16 days Zonta will be partnering with the many agencies within DART and community organizations in Oxford County to bring attention to the different way that gender violence impacts lives.

“We are extremely proud to be in partnership with leading experts and responders to acts of violence in our community for the third Zonta Says No campaign,” Poole said. “Zonta is about empowering women both globally and locally and we want to campaign to send the message of ‘No to Violence’ to all women and girls within Oxford County.”