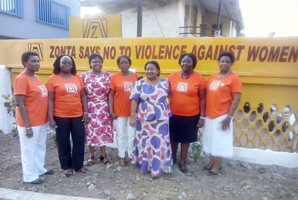 From the Awoko Biz
By Mariam Sulaiman Bah

Crime against women in Sierra Leone is on the increase and has become a sensational and despicable issue for leading women’s organizations such as Zonta International, which has started an awareness campaign, “No to Violence against Women and Children”.
As one of the leading women organizations in the country, Zonta International is taking the lead in pioneering a campaign on violence against women and children such as wife beating, degrading traditional practices, child labour, denial of female education, rape and child marriage, among many others.
Members of Zonta opined that most women in Sierra Leone are vulnerable and marginalized, creating a situation where they are easily mal-treated because of certain traditional and cultural laws impeding women’s right.
The president of Zonta intl. Sierra Leon,e Eileen Hanciles explained to Awoko Newspaper that her organization is focused on empowering women through service and advocacy therefore it is relevant for them to take up such adventure in fighting for women’s right and protection.
“Women especially in the rural areas are faced with serious challenges as they are exposed to crimes committed against them and because of traditional practices, barriers and discrimination, women are afraid to raise their voices to fight for themselves. Zonta is lending a helping hand to support women and stop these perpetrators and also to empower women through education,” says Mrs. Hanciles.
She explained that since its inception in 1976, Zonta International Sierra Leone has been involved in community development projects mainly focused on health, education and advocacy against gender based violence.
The organization has a membership of thirty-three (33) professional and business women yearning for women’s empowerment and better education as means to develop and sustained them in their future development to make them self-reliant.
Zonta International Sierra Leone is located at Main Motor Road, Brookfields via Bus-halt and as part of their campaign and mandate the organization on Thursday launched and set up ‘advocacy wall’ campaign, with inscription which reads ‘Say No to Violence against Women and Children’.
Eileen Hanciles furthered that “in response to the myriad of problems women are faced with, in particular violence against women, Zonta International Sierra Leone has set up an advocacy wall to raise awareness in the community to inform both young and old about the prevalence of violence against women  and to work towards its elimination for better development”.