These plywood cutout orange figures traveled widely throughout the year, bearing Zonta’s message as they appeared at many functions and fundraisers.

Initially they made their debut on the hill at the entry to Airlie Beach sited alongside Zonta members and beneath a Zonta Says NO to Violence Against Women banner .

They also appeared in Townsville at a high-profile football match and at a district conference. More locally, they were at the  Fun Run, the  Reef  Festival,  and  standing outside various businesses in town.

The club booked sites to raise awareness of domestic violence and also raise funds at the local markets. The orange ladies stood  at the stalls alongside 23 pair of orange women’s shoes. These shoes represent the 23 women who lost their lives to domestic violence in Queensland in just one year. 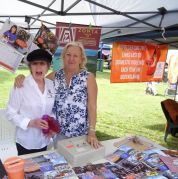 The stalls were used to sell 2017 calendars with domestic violence messages, beautifully designed with  gorgeous photographs and catchy slogans of supportive local businesses.

The club’s colorful display created many opportunities for people, both tourists and locals to stop and talk and contribute to Zonta.