In anticipation of the opening of the campaign, 16 Days of Activism Against Gender Violence, the Zonta Club of Ilocos Norte, Philippines, distributed banners with the heading, “Zonta Says No to Violence Against Women,” to the two cities and 21 municipalities in the province of Ilocos Norte, to the mayors. 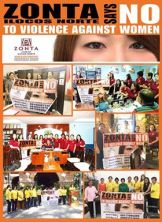 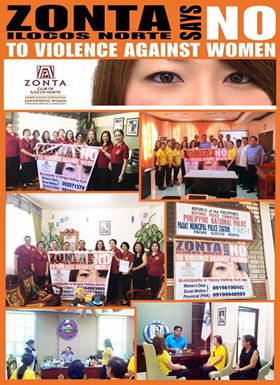 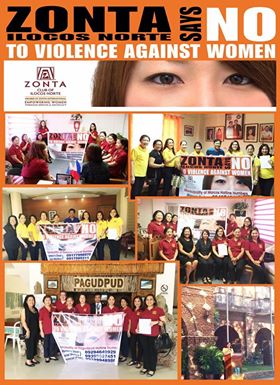 Included in the banners were hotline numbers to the city and municipality Women’s Desk as provided by the Philippine National Police Ilocos Norte Provincial Office through its Women and Children Protection Desk, and the numbers to the Social Welfare and Development Offices of the Province of Ilocos Norte and of each city and municipality.
The club took the opportunity to give petition letters to the mayors for their endorsement to the local council for the passing of resolutions/ordinances in support of the Sustainable Development Goal 5, under the 17 Sustainable Development Goals of the UN 2030 Agenda for Sustainable Development.
Added to the petition letter is the request for the support on the reinforcement of the Philippine Republic Act No. 9710, otherwise known as the “The Magna Carta of Women” that promote empowerment of women and pursue equal opportunities for women and men.
The distribution took five days to complete, taking almost all day, with many members of the club supporting the activity through their participation. The campaign received positive responses to the campaign as manifested in the display of said banners in conspicuous places around the cities and municipalities before and on the day of the start of the campaign.
Likewise, the club was able to present at some municipal council sessions and during the flag ceremony of Laoag City, the capital of Ilocos Norte, where the City Mayor and Local Council together with all the heads and members of the city government offices were present, and were given immediate affirmative replies to the petition.
The next activity to support the campaign is to make a follow-up on the petition letters and to document the display of other banners as the club requested that said banners were to be displayed as long as possible.

As requested by the Zonta Club of Ilocos Norte and Z Club of Ilocos Norte National High School and approved by Governor Imee R. Marcos, the Provincial Capitol is lit in orange. This follows the lighting of landmarks in other countries, in manifestation of their support in the campaign to put an end to violence against women and girls.