The Zonta Club of Toledo, Canada, made an effort to “orange the world” during the 16 Days of Activism to raise awareness about the global epidemic of violence against women.

As part of the Zonta Says NO to Violence Against Women campaign, they took and posted photos of  of area leaders, educators, and citizen advocates decked out in orange to their Facebook page. Each photo is accompanied by a quote that starts, “I wear orange because …”

Among those wearing orange for this awareness campaign are city and county elected officials, including Lucas County Commissioner Tina Skeldon Wozniak, Toledo Mayor Paula Hicks-Hudson and Maumee Mayor Richard Carr, and Lucas County Juvenile Court Judge Connie Zemmelman, who states, “I wear orange because I see far too many girls who accept violence as a normal, even expected, part of everyday life.  We need to teach all young girls that their bodies are the one thing they have 100% control over.” 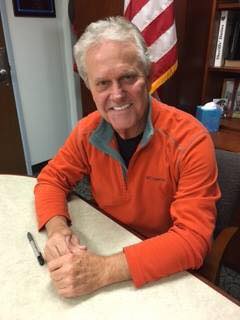 Lucas County Sheriff John Tharp (pictured, left), one of several law enforcement officials to weigh in, states, “It’s a world-wide epidemic: 1 out of 4 women faces domestic violence in her life, and 4 million each year. Human trafficking is at its highest peak.” He adds, “We are working hard to combat this crime and support victims in our community.”

John Jezak (pictured, right), City of Maumee Administrator/ Safety Director, speaks of tragedy that touched him personally when he states, “I wear orange in memory of a friend who lost her life to an abusive boyfriend.”

Dr. Sharon L. Gaber (pictured, left), University of Toledo President, explains, “I wear orange to speak against exploitation of women and children and to give voice to those silenced by abuse at homes and workplaces.” Deidre Lashley of the Bethany House shelter for victims of domestic violence, notes “Abusers exhibit violent behavior over and over and over. Helping women avoid and escape is critical.”

Some participants highlight the need for more and better laws.

Todd Curtis, Perrysburg Township Police, says “Please be aware of new legislation like Monica’s Law — help make sure it passes and is enforced.” This proposed law, Ohio House Bill 362, would increase the penalty against strangulation to a third-degree felony since an attempt to strangle is often a precursor to domestic violence murder. 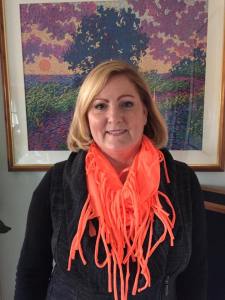 One of Ohio’s strongest advocates for protecting women and girls from human trafficking, State Representative Teresa Fedor (pictured, left), joined in the Zonta Says NO campaign with the following statement: “As all these organizations and individuals  come together to build a coalition, we form ONE powerful voice … that leads the way once again, as Northwest Ohio takes an active stand against gender-based violence. We think globally and act locally. So let’s help ‘Orange the World’ here in our home town.”