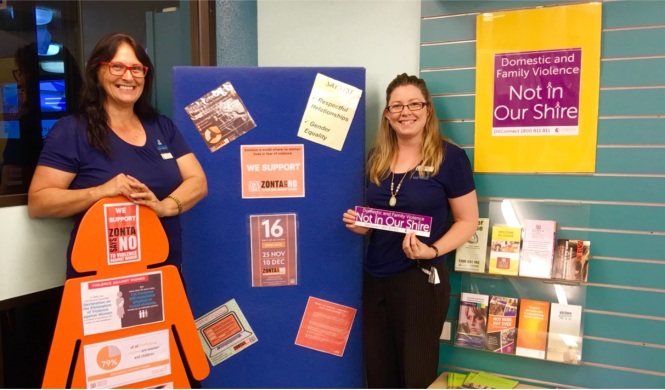 The Zonta Club of Rockhampton Inc. mounted displays at the busy Rockhampton Airport and the local Yeppoon library in Queensland during the 16 Days of Activism and as part of the Zonta Says NO to Violence Against Women campaign.

To promote awareness of the campaign and provide a range of information about local services and Zonta membership, club members mounted the displays as well as lit local monuments orange.

Two tourist locations, the Wreck Point lookout and the Singing Ship on the Capricorn Coast, as well as Riverbank lights in Rockhampton, were lit orange to symbolize the 16 Days of Activism campaign.

The Wreck Point Lookout overlooks the Pacific Ocean and the Singing Ship monument, which honors Captain James Cook, the man who discovered and named Keppel Bay in 1770, overlooks Keppel Bay in Queensland.