The Zonta Club of Jamestown, ND enlisted men in the community to stand with women during the Zonta Says NO to Violence Against Women and the 16 Days of Activism against Gender-Based Violence campaigns and challenged them to continue support beyond the 16 days.

The North Dakota club launched a program called “Stand With Us,” which was aimed at raising awareness of the importance of men intervening when they witness violence against women.

In partnership with the Jimmie Knight Society at the University of Jamestown, a table was set up for 16 days outside of the campus cafeteria. The Knights approached male students to discuss violence against women and focused much of the discussion specifically on the issue of violence against women on college campuses. 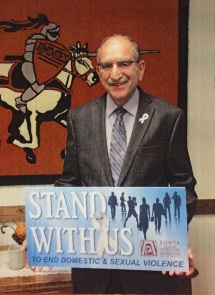 When they committed to intervening if they ever see a fellow student in danger of assault, the male students received a white ribbon.

Additionally, members of the Zonta club asked prominent male figures in the community to take a photo with a “Stand With Us” sign. The photos were then displayed at a local shopping mall.

Yard signs were also placed at the Zonta Park in Jamestown.

Members said the project was a simple way to spread the Zonta message and that by continuing to see people in the community wearing the white ribbons, they believe it was successful.