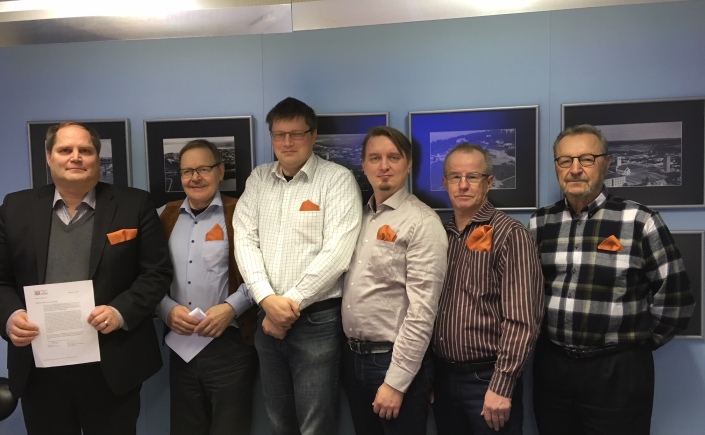 Photo caption: The city manager of Iisalmi and local industrial entrepreneurs took photos wearing their orange squares to show their support for Zonta Says NO to Violence Against Women.

In 2017, the Zonta Club of Iisalmi actively campaigned for twenty days instead of sixteen as part of the Zonta Says NO to Violence Against Women and the 16 Days of Activism against Gender-Based Violence campaigns.

The extended campaign was in recognition of the 20th anniversary of the Zonta Club of Iisalmi, which was established in 1997. The advocacy committee of the club chose to focus on the education of girls for the theme of the extended campaign.

Funds were gathered for the Let Us Learn Madagascar program to support girl’s education. The club sold 1,200 lottery tickets and was able to donate EUR $2,400 to the cause. The slogan was “An educated girl can choose a better life.”

The club also took the opportunity to challenge men to take part in the HeForShe campaign. One club member sewed over 200 orange pocket squares that were handed out by Zontians to men in power both locally as well as in the parliament of Finland. The club members hoped these would be used as a symbol of the men’s commitment towards the goal of global equality. In the parliament, there were fifty pocket squares handed to male members. The president of Finland, Sauli Niinistö, who is an Impact Champion of HeForShe, got a pocket square. The city manager of Iisalmi and local industrial entrepreneurs took photos wearing their orange squares.

The local newspaper published the writings of six local men in powerful positions regarding violence, equality and education supporting the campaign. A panel discussion was held on the local radio station, featuring the same themes as well as poems regarding women and education. The poems were chosen and read by Zontians and were performed almost daily.