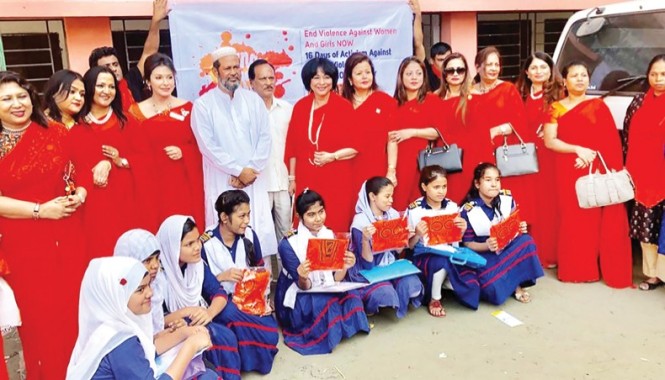 Zonta International members pose for a photograph with the teachers and students of Dhaka Gaoyair High School in Dhakkhinkhan at a programme titled ‘End violence against women and girls now’ on Tuesday.

The Zonta Club of Greater Dhaka, Bangladesh, kicked off its Zonta Says NO to Violence Against Women campaign on Sunday with a rally titled “Orange the World” at Baridhara Park in Dhaka.

Zonta Club of Greater Dhaka President Tootli Rahman and club members gathered at the park in orange dresses. They lit lamps for enlightenment and held pens as a symbol of education in their hands. They later paraded through the park in a procession.

Rahman said the club is working to end child marriage.

“We’ve already saved over 1,000 girls from falling victims to child marriage in Kurigram,” she told the newspaper New Age.

Rahman also said the club will be holding events throughout the 16 Days of Activism Against Gender-Based Violence to create awareness of the negative impacts of child marriage.