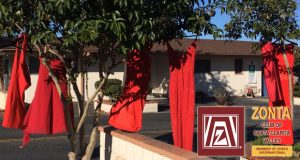 Seven red dresses hung outside of KHTS Radio on Tuesday as part of an annual “Red Dress Project” display honoring seven Santa Clarita women who were killed by domestic abuse.

Throughout the 16 Days of Activism Against Gender-Based Violence, the campaign is aimed toward bringing awareness to domestic violence in the community and is part of the annual Zonta says NO to Violence Against Women campaign.

“Yes, domestic violence is in Santa Clarita,” said Susan Hayward, a member of the Zonta Club of Santa Clarita Valley, USA. “The dresses are red because of the blood that was spilled during the time that they were abused.”