The Zonta e-Club of West Africa, District 18, commemorated the International Day for the Elimination of Violence Against Women with an art exhibition at Alliance Française in Accra, Ghana, in collaboration with the French Embassy in Ghana, UNFPA, Alliance Française d’Accra, and CoPASH (Coalition of People against Sexual and Gender-Based Violence, and Harmful Practices).

Members of the Zonta e-Club of West Africa took part in the art exhibition and official ceremony as part of the club’s way of recognizing the Zonta Says NO to Violence Against Women campaign.

The program, which was aimed at raising awareness of the hidden forms of violence against women, was preceded by a call for projects from both male and female artists on the subject. The collection of art came in different forms and communicated the various types of abuse women and girls suffer in a moving and engaging way. 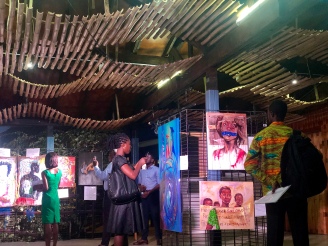 Samira Bawumia, second lady of the Republic of Ghana, Anne Sophie Avé, French Ambassador to Ghana, and the Chilean ambassador to Ghana attended the official ceremony. Also in attendance were the artists who submitted works for the exhibition: the Lycée Français d’Accra Jacques Prévert, Achimota Senior High School, and members of the local community. There was also a performance by Drama Queens, a feminist political theater organization.

Joyce Dzide-Tei, president of Zonta e-club of West Africa, commended the French Embassy and its partners for strongly advocating for gender equality. She mentioned that the club will be actively engaged in multiple events to mark the 16 Days of Activism of Activism against Gender-Based Violence and encouraged both men and women, victims and survivors, to continue to take a stand to end all forms of violence against women and girls worldwide.