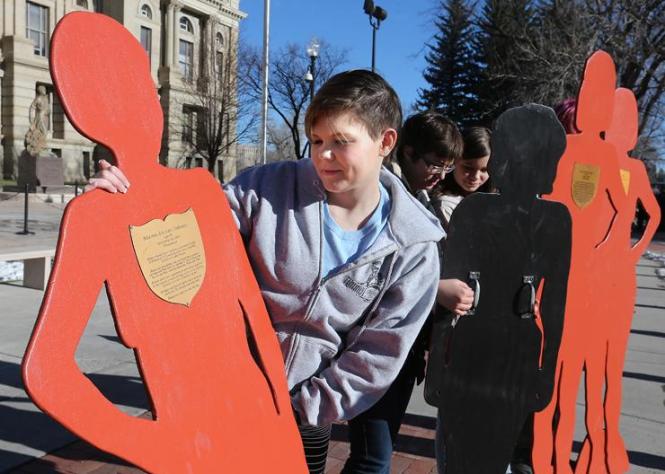 Triumph High School senior Madison Amann checks out a silhouette cutout of a victim who died at the hands of an abuser before marching Monday at the State Capitol in Cheyenne. Students from the school’s Z Club marched with the silhouettes to the Laramie County Library in recognition of domestic violence awareness. (Blaine McCartney/Wyoming Tribune Eagle)

A group of students from Cheyenne’s Triumph High marched in silence Monday morning from the State Capitol to the Laramie County Library.

Each carried a silhouette with them – more than three dozen in all – each representing a victim of domestic violence in Wyoming.

Their stories differed from one person to the next, but they all had the specter of domestic violence in common. There was Sharon Johnson, who was 43 when her husband ran her over with his car, leaving their two children without a mother.

There was Robin Munis, age 40, who was singing on stage at Old Chicago in Cheyenne when her estranged husband shot and killed her with a sniper rifle.

And there was Crystal Town, 29, whose husband was sent to prison for 75 years to life last year for shooting her in front of their 10-year-old daughter.

“We grieve for the family that lost the loved one. But beyond that, you grieve for the opportunity lost,” said Gov. Matt Mead, who signed a proclamation Monday recognizing 16 days of activism against gender violence in Wyoming from Nov. 25 to Dec. 10.

Those dates are not coincidental: Nov. 25 is the International Day to Eliminate Violence Against Women, while Dec. 10 is International Human Rights Day. But since the Triumph students knew they would be out of school by the 25th, they opted to hold their march two days earlier to publicly honor victims like Town.

“Consider Crystal, who and what she could’ve become, what she could’ve contributed,” Mead said, turning to the students. “We all have a role to play, but the most important role lies on your shoulders. It is you all, your leadership, that is going to provide the answer that says, ‘In Wyoming … there’s no instance where domestic violence is acceptable.'”

Monday’s marchers were mostly members of Triumph’s Z Club, a youth spinoff of Zonta International, an Illinois-based service organization that seeks to advance the status of women across the globe. And like the silhouettes they held, many of Monday’s marchers said they were similarly affected by domestic violence.

“This is close to my heart because I was abused by my father, and so was my mother,” said Triumph senior Madison Amann. “So it carries a lot of significance personally to me, and it brings awareness and advocacy to other people.”

Another senior, Jessica Kling, said she joined the Z Club after watching her father abuse one of her brothers.

“There was one case where he put his tooth through his lip and continued to hit him in the back and throw him through things,” Kling said. “That’s the main reason I wanted to join Z Club, because it’s not right for people to have to go through those things.”

Kling said that, too often, domestic violence is swept under the rug, with victims unwilling or unable to confront it or tell their stories. She said that imposed silence makes it doubly important for advocates to provide a voice for victims.

“It doesn’t make headlines like it should,” Kling said. “This is showing people that it really happens; it’s not just some story.”

Jolynn Murphy, a co-adviser for the Triumph Z Club, read off some of the state’s domestic violence statistics, noting that 66 women, seven men, four minor boys and one girl have died since 1985 as a result of domestic violence in Wyoming.

“Domestic violence doesn’t just affect victims and perpetrators; it affects the family and friends who are left behind,” Murphy said. “The problem will continue until we as a society and a community stand up with one resounding voice and say, ‘No more!'”

Cheyenne City Councilman Dicky Shanor also took part in Monday’s march. Having worked as a domestic violence prosecutor for Laramie County, Shanor questioned why there hasn’t been more awareness directed toward the issue in recent years.

“It’s very prevalent still – hundreds and hundreds of files funnel through the district attorney’s office in our county every year,” Shanor said. “I just want to say thank you to all of you for doing this, for raising awareness around this issue.”

Murphy noted that several of the silhouettes used in Monday’s march will remain on display through Dec. 10. They can be seen at the Laramie County Library, 2200 Pioneer Ave., as well as at the Cheyenne Municipal Building at 2101 O’Neil Ave., the Joseph C. O’Mahoney Federal Building at 2120 Capitol Ave., and Grace United Methodist Church, 2950 Spruce Drive.

Local musician Ty Warner concluded Monday’s march with a song he wrote in honor of Munis, whom he shared a stage with the night she was killed in July 2007.

“A shot rings out, and a soul is dashed; a pool of life, and a song is past,” Warner sang. “Tried to reason why, but reason won’t return. And it happens in the blink of an eye.”