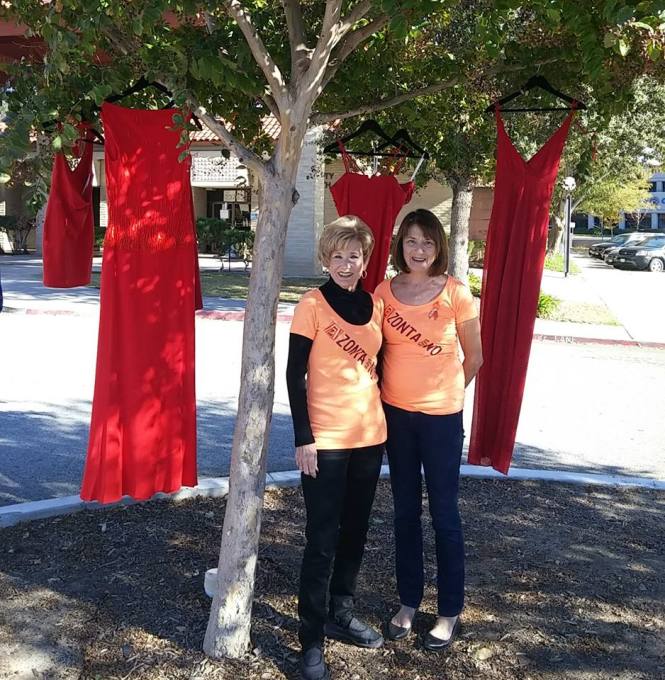 The Zonta Club of Santa Clarita is displaying six red dresses throughout their community, each dress representing a local woman who lost their life to domestic violence. The dresses will be displayed outside in the wind and the weather. “Those elements will animate the dresses, revitalizing the life that is missing,” says the Zonta club’s press release.

The Zonta Club of Santa Clarita committed to participate in the 2015 Zonta Says NO to Violence Against Women campaign and the United Nations 16 days of Activism.

The purpose of the campaign was to bring awareness to the presence of domestic violence in their community, focusing on those who have lost their lives in 2015 because of domestic violence. The club also provided education on the concept of being an “Upstander and not a Bystander” meaning, by making that one change, you could potentially save a life.

Six red dresses were displayed around the club’s city, depicting six women who lost their lives in 2015. The beautiful red gowns were taken to 16 well-traveled locations and hung in the trees. Having the dresses outside meant that they interacted with the elements, and the dresses came to life in the wind.

The color red is many things, life blood, love, and spilled blood. It was an extremely powerful visual that not many people could walk past without stopping. Every person was shocked to hear who the dresses represented. Comments included, “That is amazing!” “Haunting.” “Wow! I had no idea.” “Thank you, please keep doing this.” “Thank you for what you are doing.”

The club handed out cards that told the story of the Zonta Says NO to Violence Against Women campaign and the project on one side, and how to become an “upstander and not a bystander,” along with local resources that they could use anonymously on the other side. The project was in cooperation with the Domestic Violence Center of Santa Clarita, and in collaboration with the City of Santa Clarita, the Santa Clarita Sheriff’s Department and Domestic Intervention Violence Education Resource Team (DIVERT) Task Force, that has nine agencies represented.

There was coverage on the local radio station, local TV station and on social media. Read more from the Santa Clarita Valley Signal below.

From the Santa Clarita Valley Signal:

The “Zonta says NO to Violence Against Women” campaign is displaying six red dresses throughout the City from Wednesday, November 25, 2015 to Wednesday, December 11, 2015.

The six red dresses depict six local women who have lost their lives due to domestic violence. All of the dresses will be displayed outside, vulnerable to wind and weather. Those elements will animate the dresses, revitalizing the life that is missing. The color of the dresses are meant to symbolize love and spilled blood, an inescapable reminder of the intimacy of domestic abuse.

The red dresses can be viewed at the following locations and times:

• College of the Canyons – Wednesday, December 2, at 26455 Rockwell Canyon Road

“Law enforcement is just a small part of the effort against domestic violence,” said Captain Roosevelt Johnson. “The red dress campaign helps with the bigger part of the strategy – educating and promoting awareness about the realities of the issues in our community.”

The Zonta Club of Santa Clarita is a member of Zonta International, a worldwide service organization of professional women, recognized by the United Nations with consultative status. The clubs support a broad range of services that have the potential to make a global impact and can be sustained through local efforts. The Santa Clarita Valley club was founded 36 years ago and has more than 70 members.

The “Zonta says NO to Violence Against Women” campaign is supported by the DIVERT team as an educational outreach to the Santa Clarita community about domestic violence. For more information about DIVERT, please visit divert.santa-clarita.com.

For more information about the red dress campaign, please contact Linda Davies, Executive Director of the Domestic Violence Center of SCV at (661) 259-8175 orldavies@dvc-scv.org