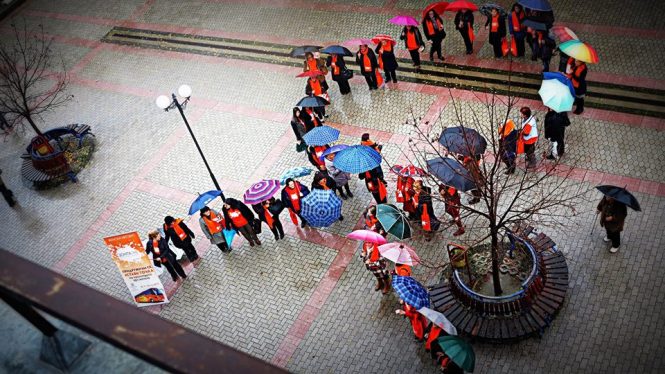 The Zonta Club of Skopje, Macedonia is currently running their Zonta Says NO to Violence against Women campaign that started on 25 November and will run trough 10 December.

As part of their project, The Women’s Orange Bus, the Zontians will travel across the country for 16 days, in the branded orange bus, organizing various activities in 13 towns and rural areas such as an orange march, debates, workshops and art performances.

The Zonta Club Skopje will join forces with other anti-violence advocates, domestic violence prevention organizations, and community-based organizations. Through partnership building, coordination and engaging with multiple stakeholders (civil society, academia, media, etc.), we are aiming at strengthening the commitment of different levels of the society, strengthening commitment towards women participation in public life. The project is supported by USAID Macedonia, and the club is organizing some of the activities as a joint effort with UN family in Macedonia and the Delegation of the European Union in Macedonia.

The idea behind the Women’s Bus campaign is very simple, yet, very powerful. The major part of the campaign will be implemented outside the capital – Skopje, in smaller towns or rural areas, reaching out to new audiences by organizing the activities in spaces such as restaurants, sports clubs, shopping malls, market places, bus stations etc. The idea is to MAKE THOSE SPACES ORANGE!

A special emphasis will be given to the hair and beauty salons across the country, by engaging them in distributing domestic violence information to their clients. A small credit card-sized cards, will be provided to hairdressers and beauty salons to hand out to clients.

The kick off of the project was on 25th November, by participating in lighting the Stone Bridge in the city in orange color, followed by a reception and official announcement of the Zonta Orange Bus where UN Ambassador Ms. Louisa Vinton, and USAID Mission Director Mr. James Stein addressed the audience.

During the whole campaign, the club will engage the social media to cover the activities. Additionally, local media will cover the trips. All produced video materials will be edited in order to produce a mini documentary movie. Zonta Club Skopje will use three Facebook pages to boost the campaign: Zonta Club Skopje, The Orange Campaign, The Women’s bus.

Below is a slide show of select photos from their tour.
Follow the club on their Facebook page to see updates.