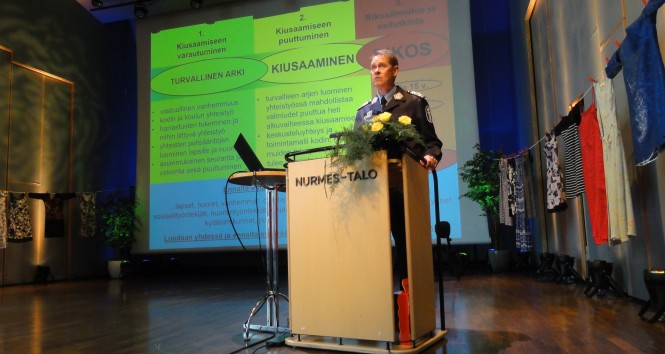 The Zonta Club of Nurmes, Finland, organized a seminar on safety in everyday life as part of the Zonta Says NO to Violence Against Women campaign in early June.  The guest speaker of the seminar was the highest ranking police officer in Finland, National Police Commissioner Seppo Kolehmainen.

Kolehmainen reminded attendees that nobody need or should tolerate violence in any form and that nothing justifies violent behavior toward other people.

According to Kolehmainen, the biggest threat to everyday safety in Finland is social exclusion. Preventing that is up to everyone, not just the police, he points out.

Kolehmainen says that the key issue is how young people are treated.

Seventeen women died as a result of domestic violence in Finland last year. To symbolize these victims, 17 dresses were hung on a line on stage in Hannikaisen Sali in Nurmes-Talo. An installation similar to this one was on display at the district meeting in Oulu in April.

“Domestic violence is against the law, and the authorities are duty bound to intervene,” says the leading social worker, Maarit Haatanen. She and the chairperson of the multi-professional risk assessment group, Mika Kivelä spoke about the concrete help available for domestic abuse victims in the Nurmes area.

They assured that these resources were readily available all the time and at short notice. However, the victim must want to be helped, they pointed out. No adult can be helped against their will.  To break the cycle of violence, there is help for the abuser, too, Haatanen and Kivelä reminded.

The audience asked questions about bullying in schools, which has been a hot topic in Finnish media in recent years. Kolehmainen says that the ground rules have to be clear: bullying is not allowed and the incidents have to be intervened. Haatanen mentioned that bullying is often cited in child protection cases.

The Everyday Safety seminar was created by the club’s Advocacy Committee.