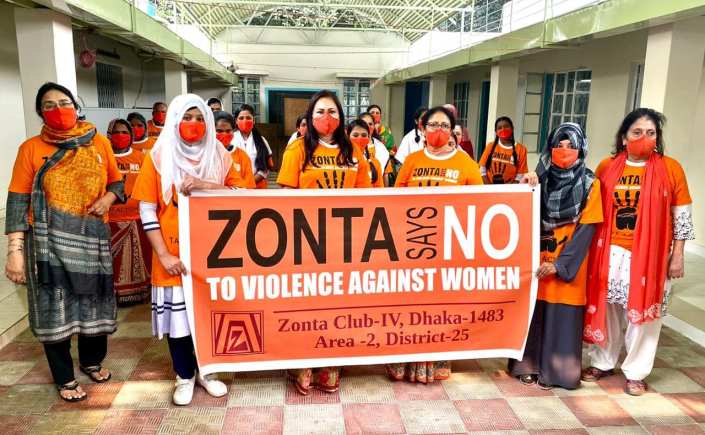 During the 16 Days of Activism against Gender-Based Violence, the Zonta Club of Dhaka IV, Bangladesh, held multiple events to advocate for ending violence against women and the Zonta Says NO to Violence Against Women campaign.

On 25 November, the club hosted an awareness program maintaining all the health precautions with 60 cleaners of Baridhara Society at Baridhara Park. The event focused on the prevailing violence against women and health issues in the society in this pandemic. Club members distributed food and blankets among the cleaners.

On 27 November, the club distributed orange T-shirts, face masks and shopping bags to different shops. The slogans on these items highlighted the symbolic protest against all kinds of discrimination and violence against women and girls in our society.

Om 29 November, the club distributed orange T-shirts and face masks to the underprivileged girls of the Ready Made Garments (RMG) Skills Training project that the club had undertaken in partnership with Anlima Textiles Mill, based in the outskirts of Dhaka. The distributed items were imprinted with messages to resist and protect girls from threat, sexual harassment, stop child marriage, stop violence, educate girl child and stop dowry.

On 5 December, the club inspired and encouraged their education project girls, teachers and staff at Gulshan Ladies Community Club to be aware of gender-based violence and take actions to prevent it. Overall support has been given to them for their education. There was a group discussion with the students so that the girls raised their voices. Club members distributed orange t-shirts, face masks and food bags to all the participants.

On 9 December the club partnered with rickshaw pullers and salesmen from shops around their community. They distributed their orange T-shirts, face masks and bags that bears Zonta logo and different awareness messages to educate about any prevailing injustice against women. On the back of each T-shirt there were the slogans like, “Stop domestic violence,” “Stop child marriage,” “Educate girl child,” “Stop dowry” and “Stop sexual violence.”

On 10 December, club members gave time and shared innovative ideas to continue ongoing advocacy efforts in their project in the pandemic. To discuss the issue of gender-based violence in this pandemic, the club organized a program with the students and teachers of their sewing project Uttara on this Human Rights Day. The event included an advocacy program hosted by lawyers in the club, addressing the issue of gender-based violence, sexual harassment, early marriage, rape, dowry, etc. The program was highlighted by a successful story of an underprivileged girl who shared her knowledge and raised her voice against any kind of women violence through the Zonta Club of Dhaka IV. The program ended with the distribution of sewing machines among the underprivileged girls, which were a spontaneous support from individual and club members.

The club also composed a video song on violence against women by a renown singer in Bangladesh. The song spreads the message to support and join the movement of ending all kinds of violence against women, including domestic violence, rape, sexual harassment, child marriage, human trafficking, equal rights, equal pay, equal distribution, positive attitude and respect to women. The song focused on women empowerment by giving education and training to underprivileged women by the Zonta Club of Dhaka IV.

Lastly, the song encourages local and national initiatives to influence making and implementation of laws, as well as changing gender-based attitudes and behaviors to end violence against women. The song was published on different social media platforms and broadcasted at local radio stations from 25 November through 10 December.