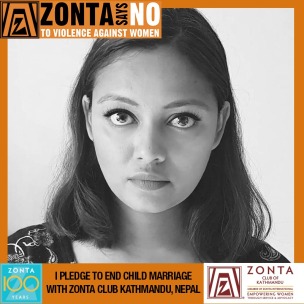 Members of the Zonta Club of Kathmandu, District 25, have started an awareness campaign on social media alongside local celebrities as part of the Zonta Says NO campaign.

The club has partnered with celebrities who have large numbers of social media followers and who will post their pledge to #EndChildMarriage online for their followers to see. Thirty-two celebrities have joined the club in their efforts and two have already scheduled posts on their social media accounts.

Members of the Zonta Club of Kathmandu hope to reach a diverse audience with this social media campaign.

Members created a Facebook profile frame with the pledge so anyone can use the frame and pledge that way and special stickers were also created. The #EndChildMarriage stickers are given to drivers to encourage them to take the pledge and advertise their commitment on their car window.