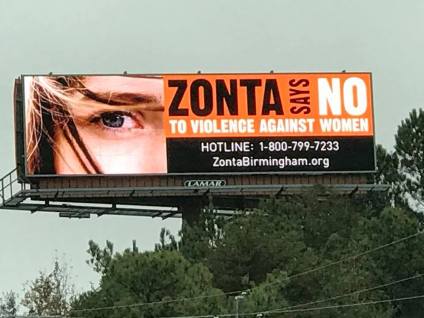 The Zonta Club of Birmingham, District 11, worked with an advertising company to use a billboard to advertise this year’s 16 Days of Activism against Gender-Based Violence campaign.

Members said that although they will never know how many people visited their website or called the hotline, they are happy to know the billboard could have helped even just one person.

Zontians in Alabama and the rest of the United States have a special concern on the issue of child marriage. In Alabama, girls can be married at the age of 16 with a court or parental permission.  The U.S. law supporting efforts by law enforcement, nonprofits and government agencies to combat sexual violence and support domestic violence victims, the Violence Against Women Act, could expire soon and there are major obstacles to reauthorization.  The major federal law to combat human trafficking and assist victims expired a year ago.

The billboard, along with other action Zonta club members in Birmingham take, is all in the interest of changing existing policies and protecting more women and girls from violence.