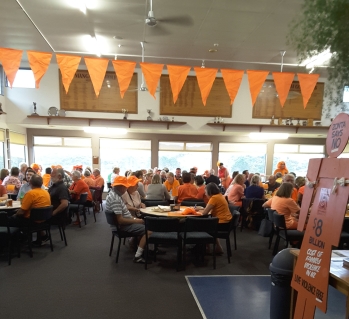 Members of the Zonta Club of Mangawhai, District 16, acknowledged the 16 Days of Activism Against Gender-Based Violence with three main activities.

Members knit-bombed a large tree at their local library and arts center complex, painted men’s, women’s and children’s shoes orange and hung them along a fence with two wooden orange dolls and a sign, and held an orange themed Quiz Night.

During the 16 Days, a visiting English tourist was murdered in New Zealand. A vigil was held to remember Grace Millane throughout New Zealand and several Zontians took part in the local walk, holding candles and wearing their orange shirts.